Was I the only one who just went "COW SMASH!?" 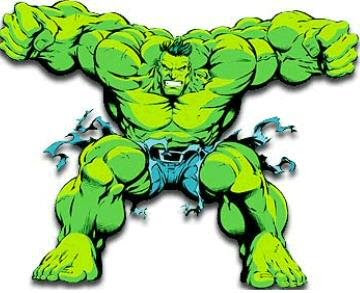 These Hulk-esque cows are not the result of gamma rays gone awry (they aren't green, silly). Belgian Blues (a variety of Bos taurus) are selectively bred to be huge, muscular cows thanks to a single defective gene.

This gene's purpose in life is to regulate muscle mass and simultaneously trim down fat. It has parallels in mice and, yes, humans. Normally, a gene making the protein myostatin would keep the muscle mass down; when it malfunctions, the result is called 'double muscling.' It makes the meat of the Belgian Blue leaner, enough so that one barely has to cook it to get all the fat off. Check out the stats alongside supermarket meat and chicken breasts - WOW!

There are, of course, reasons that such a muscle-inhibiting gene exists. Although being beefy like that cow may sound like a good idea to some of my readers, the babies of that cow are so big that the mother cows have to be repeatedly C-sectioned to get the calf out. The birth canal in a Blue cow is also narrower than usual, so even when she is bred to a 'normal' bull, she has trouble being a breeder.

Selective breeding does not have to be nearly as complex as the video makes it sound. All it means is that people are breeding animals for a specific trait. That means regulating reproduction for great awesomeness...or great freakishness. We will be seeing plenty of both this week, depending on your perspective.
Posted by KuroKarasu at 10:44 PM