Although many vertebrates may take on the pattern of "big, impressive male, small female," insects tend to see the world a bit differently. Many of you have probably heard of the praying mantis eating the male after mating (which, again, makes PERFECT sense to me), and of ant/bee queens. Sexual dimorphism in favor of the female is not a hard and fast rule for insects, but seems to be pretty solid in the order Hymenoptera - the order containing ants, bees, wasps, sawflies, and hornets.

This brings us to ichneumonoid wasps. If you thought the reproductive system from the Alien movies was weird, bear in mind that the Xenomorph's way of doin' it was based LARGELY on this particular sort of insect (with later nods to eusociality).

If the earlier entry on botflies did not tip you off, chest-bursters are very, very real in the cruel world of nature. There are a number of ways that they can theoretically happen, but, in the case of ichneumon wasps, they deposit the eggs via a whip.

"If I be waspish, best beware my sting..." Yeah, I'm sure I butchered that Shakespeare quote, but stingers ARE derived from ovipositors. Way to lace an extra innuendo in there, Bard.

The females of Megarhyssa and Rhyssa in particular are equipped with slender, narrow ovipositors (tubes for depositing eggs). Although many insects have ovipositors of some sort, ichneumon wasps have ovipositors that curl over like scorpion tails. This has given them the nickname of "scorpion wasps."

Why does the female need such a long ovipositor? Ichneumonoid wasps lay their eggs inside other insect larvae. The infected larvae are, slowly but surely, eaten alive. 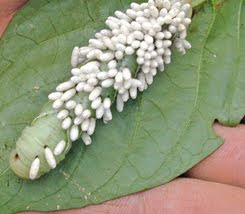 Despite their creepy appearance and alien reproductive habits, these wasps are quite efficient at pest reduction (like the giant hornets are). They also use polydnaviruses to suppress the host's immune response, which is more than can be said for the Xenomorphs. 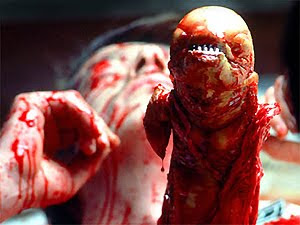 Just pest control. Nothing personal.
Posted by KuroKarasu at 10:03 AM