Pigeons have some of the freakiest breeds in the avian world. If you thought the Polish Chicken was freaky, think back to my pigeon article. There was a picture of a Jacobin there - a pigeon breed that looks like its head exploded into a mess of feathers. 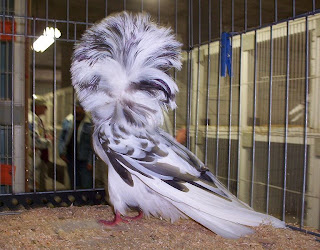 The Jacobin is not the weirdest pigeon in the coop. An even more bizarre breed, the barb, exists. It can only be described as a pigeon who was trying to be a vulture for Halloween and failed. Miserably.

The video does not do those wattles justice.

This...bizarre breed been around for 400 years in Europe. The barb has been featured in the works of Shakespeare and Darwin's Origin of Species. Darwin himself was a pigeon breeder. No doubt that experience impacted one of the most important works of literature ever.

A lot of scientific discoveries are not made by men in sterile white labs. Darwin not only bred pigeons as a hobby, but also went to the Galapagos himself. Gregor Mendel, the father of modern genetics, worked in a monastery growing peas as a hobby. It is one thing to read about evolution, and another to steer it yourself...even if the results seem more odd than beautiful.
Posted by KuroKarasu at 9:55 PM