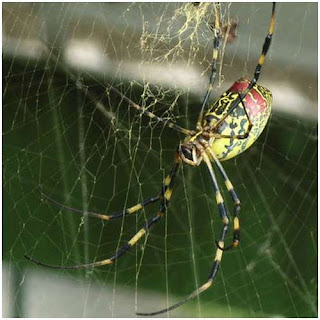 Every culture has its own version of the succubus: A sexy, sultry she-devil who lures men into her bed, then either drains their energy or eats them afterward. In Europe, she has the typical, goatlike demonic traits when in her true form; the Greek lamia evolved into a seductive snake-woman; foxes in Korea, Japan, and China have long been known to use lovers for their own evil ends. 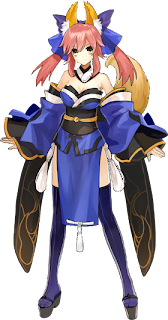 Oh, come on. You have to help this fox take over the world.

Japan has as big a thing for man-eating, seductive female monsters as Greece and Rome did (count the Greek monsters with racks. Hurry!). Besides kitsune (foxes), the yuki-onna ("snow woman"), hone-onna ("bone woman"), and several other female youkai prey on the libido of human men. The spider-lady jyorou-gumo (also written as 'jorogumo,' 'joro spider,' or 女郎蜘蛛) is one of the few seductive creatures with a basis in fact. (Fun fact: When the word is written in katakana, it is always referring to the arachnid.)

"I told you that she's hot as Hell..." The screencap is from CLAMP's xxxHOLiC, and the lyrics are from Lady GaGa's "Monster." It will become relevant very soon. (Plus, I'd hit that.)
Although many youkai come from real animals, there may be a particular reason that this spider wound up as a seductress. Like the black widow, the female jyorou-gumo is more brightly colored and several times larger than the male. After mating, the jyorou-gumo may try to eat him - the smaller the male, the more likely he is to escape.


The pretty one is the lady, this time.

The "prostitute spider" is just as notorious in Japan as the black widow is in the West, possibly for the same habit of sexual cannibalism. It is nonetheless viewed favorably; N. clavata is a gorgeous spider, and its golden thread is strong enough to make socks and bulletproof vests. Seriously.

Japan has another, vaguer youkai called the tsuchigumo ("ground spider") with a slightly different web to spin. Like jyorou-gumo, she is frequently portrayed as an attractive spider demoness, but her name is derived from a tribe of cave-dwelling dwarves in the Japanese Alps. She is not even consistently female; many stories feature male tsuchigumo. Other times it is simply a giant spider. This creature shares its name with the ground spider (Atypus karschi). The ground spider is not as beautiful as N. clavata, but I am sure that a spider fanatic can tell me how interesting it is. ;)

More on youkai: The Obakemono Project.

(YAY, my first spider article!)
Posted by KuroKarasu at 8:45 PM