Ever think of dyeing yourself electric blue to show your masculinity? No? That's because a gecko did it first. 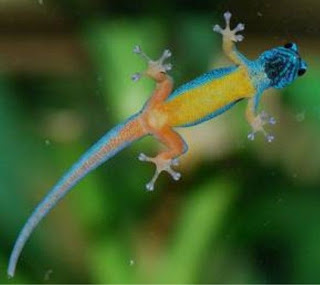 Yes, this creature really is called the Electric Blue Gecko. Other names include William's Dwarf Gecko and Lygodactylus williamsi. They are native to the tropical forests of Tanzania, but the one up there was at this year's February NARBC. They are considered under threat of habitat loss - go, captive breeders, go! (I wonder if the one I photographed was captive bred at all; the Beauty Snake they had looked like it had some shipping damage.)

Chameleons are not the only lizards that change color. Many other lizards, including anoles (American 'chameleons' frequently sold in pet stores and encountered in Florida) and these geckos are capable of changing color. This can be in response to either temperature or a change in mood.

In this case, the electric blue gecko is not always electric blue. The males are more prominently colored, but, if they are feeling under the weather or socially-unwell, can look similar to females. The females can also be a brighter green than usual, but never turn quite as shiny or blue as the males.

Like many tropical animals, they are considered difficult to keep in captivity. One settled, however, they adapt readily. They can be easily trained to go onto one's hand with an offering of treats.

In any case, they really get one's attention! How could I not look them over? They are not the world's only blue lizards, but they certainly are among the most fabulous.

(...I swear I'll do something not blue tomorrow.)
Posted by KuroKarasu at 8:43 PM